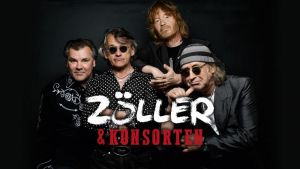 The German band Zöller & Konsorten first appeared in 2016 as a rock ‘nd’ roll group that brought together some of Germany’s best rockers: Jürgen Zöller, Lyle Närvänen, Christoph Stein-Schneider, Steffi Stephan, all admittedly lovers of the road and some of them with more than 30 years touring. Their first single Achterbahnfahrt served as an introduction for what was to come: their debut album Flucht nach vorn. Every song cut by the band is pure spontaneous rock and a snapshot of a lifetime lived by drummer and singer Jürgen Zöller. They have been touring since then and writing new songs to play live! If you want to discover more about Zöller & Konsorten, you can visit their website or listen to their music on all digital platforms!